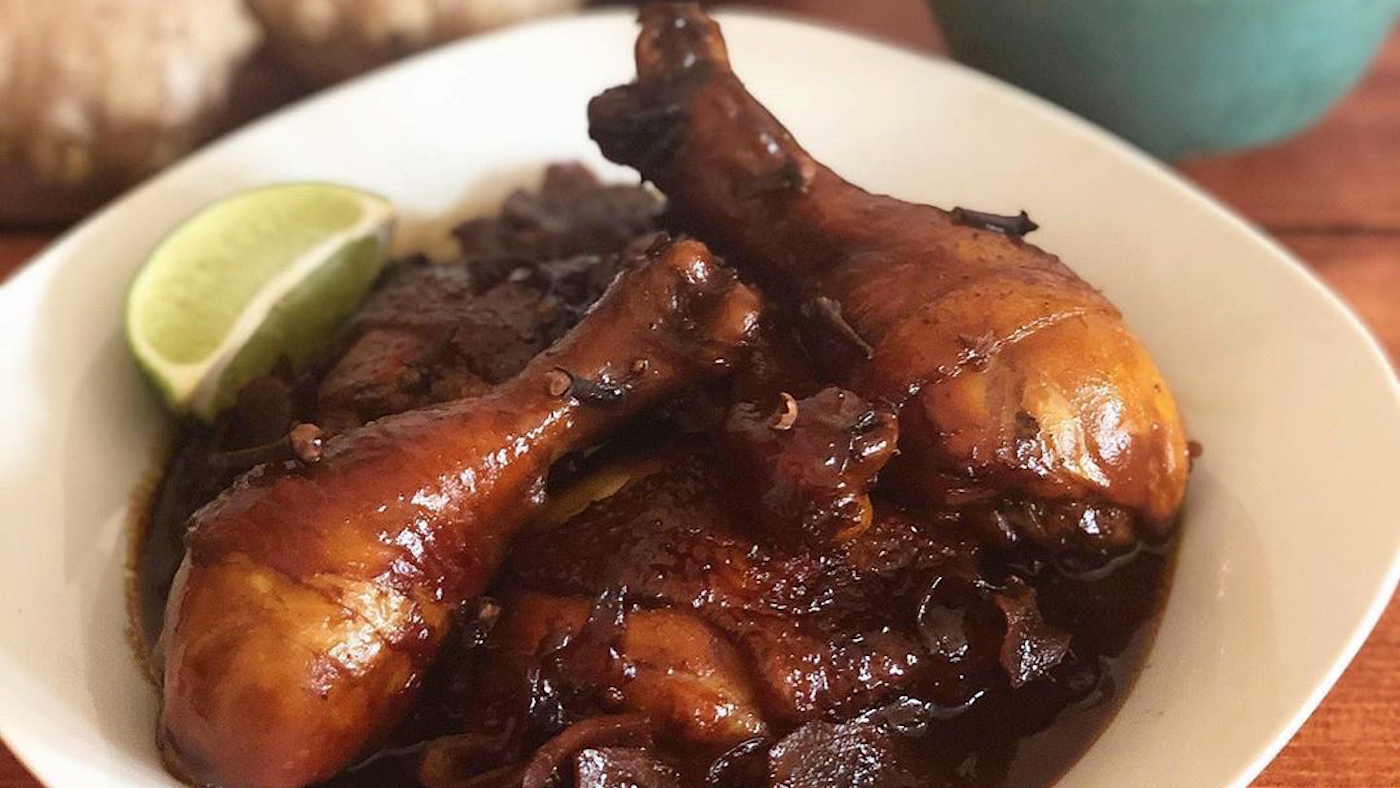 When Don Reed walked into a kitchen full of food, he knew to ask if his wife Jane had had a trying day. “If I have a bad day, I cook,” says Jane. “A lot of women are like, ‘Oh, I have to cook. What am I cooking?’ I don’t know. I just go into the kitchen and look at what I have and do something. I just like to cook.

Not that she only cooks when she’s upset; she loves to cook in general. It’s a passion she passed on to her son Chris Reed. “He was always in the kitchen with me. He was always watching what I was doing,” Jane says. So when he decided to start his own business after attending cooking school at Kendall College in Chicago, he did so with his mother and focused on the unique cuisine she grew up with.

Jane is Dutch-Indonesian, born in Indonesia and raised and educated in the Netherlands before moving to Germany with her family. It was in Germany that she met Don, born in Louisiana, through his father’s work in NATO. When she and Don moved to Chicago, “you couldn’t find any Indonesian stuff,” she says. People “didn’t even know about Indonesian cuisine”.

So she cooked for parties and fundraisers to introduce people to Indonesian cuisine, having relatives ship off or bringing in ingredients that were impossible to find from the Netherlands, where there is a large Indonesian population. Chris decided to turn these efforts into a business and started Rice Table with Jane in 2008. They sold Indonesian food at festivals including the Pitchfork Music Festival, started by Chris’ brother. Mike Roseau– then extended to catering and temporary events. (Helpful family members are a theme: One of Jane’s brothers “does a lot of biology” and taught Chris how to make tempeh at home by fermenting soybeans with yeast the brother makes.)

The name “Rice Table” is an English version of rijsttafel, an Indonesian multi-course feast that was served primarily to Dutch colonizers in Indonesia and then brought back to the Netherlands by Indonesian cooks, according to Jane. “In Holland, you can buy rijsttafel at any Indonesian restaurant, but for us it’s mostly when there’s a party,” she says. It also allows people to try many Indonesian dishes in a pop-up event.

Eventually, Chris decided to start incorporating Creole dishes into the business in honor of his father. Don had taught Jane how to cook Louisiana classics like okra, kidney beans, and rice while they were living in Germany, and Chris eventually learned them too.

To honor both sides of his culinary heritage, Chris changed the company name to Bumbu Roux: bumbu is an Indonesian spice and roux is the thickening base of many Creole dishes. It now offers both a Louisiana menu and Indonesian menu for catering, and also sells some homemade Indonesian products like sauces and pickles.

Bumbu Roux is an important celebration of Chris’ background, given the welcome Jane and Don first received when they moved to Chicago around 1969. “I hated it here,” Jane recalled. “I’m very Asian and my husband was black, so ’69, ’70 in Chicago wasn’t really a good time to be here. [for us]. I didn’t understand racism. So they moved back to Germany for a while before returning to Chicago.

Now, although many people are unfamiliar with Indonesian cuisine, they are much more open and curious. Jane always explains each dish at a rijsttafel event, and she and Chris love to hear people’s comments. Chris “loves it when people come back and say, ‘We really liked your food,'” says Jane.

Bumbu Roux briefly had a stall in the West Loop Politan Row food hall, but switched to takeout and delivery during the COVID-19 pandemic, then eventually returned to food and pop-ups because gatherings were allowed again. Chris has just purchased a food truck and will be serving food at farmers markets over the summer, as well as pop-ups at various other locations such as breweries.

Jane has mostly taken a step back from the day-to-day operations of the business, although she still helps Chris at events and still cooks Indonesian food at home “at least three times a week”. One dish she might cook is ayam semur jahe, a simple chicken braised in sweet soy sauce. “We grew up with it,” she explains. “My mom used to do a lot.” It uses kecap manis, a ubiquitous Indonesian sweet soy sauce that Chris makes himself, though you can also buy it at the store.

Try Chris’ recipe for ayam semur jahe, adapted from Jane’s, which is adapted from her own mother’s. It might be the perfect thing to do the next time you’re having a bad day.

1. In a 6-quart saucepan, heat vegetable oil over medium heat. Sauté the onion until translucent. Add the garlic and sliced ​​ginger and sauté until fragrant, about 30 seconds.

2. Add soy sauces and chicken broth. Bring to a boil. Add the chicken thighs and reduce to low heat. Add ground cloves and season with salt and pepper to taste. Simmer uncovered for 30 minutes, until the cooking liquid has reduced by about a quarter.