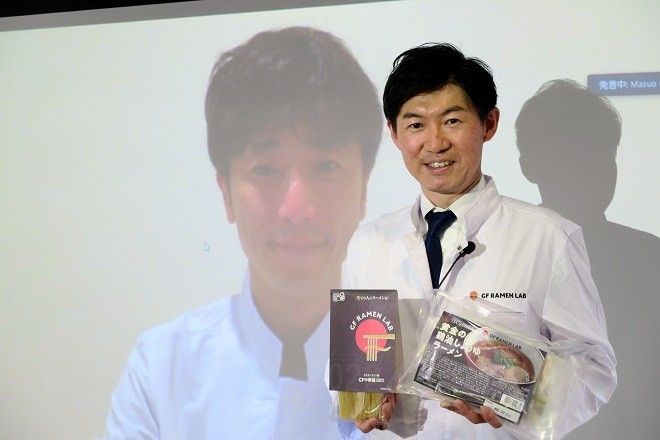 KOBE – Kenmin Foods Co. sells a gluten-free frozen package of rice-based ramen, as well as soup and toppings to cater to wheat-allergic and health-conscious individuals.

For the ramen, the company used the same flour as its flagship rice vermicelli products. He also used a special soy sauce with a fermentation process that doesn’t require wheat.

A dedicated production line has been newly set up in the development stage to prevent the product from being contaminated with wheat.

Although gluten-free dried ramen noodles have previously been available in the Japanese market, the company’s brainchild is the first gluten-free set that includes ramen, soup and other materials, according to Kenmin Foods.

The food supplier in the Chuo district of Kobe is looking to expand its sales in the United States with the gluten-free option.

Catering to those who have never tried ramen due to allergies and other reasons, Kenmin Foods set out to create an “orthodox soy sauce ramen.”

Alkaline “kansui” water is mixed with rice flour like regular ramen, which gives it the springy texture and aroma typical of this type of noodle.

The broth is prepared by boiling branded poultry from Miyazaki Prefecture. Roast pork and pickled bamboo shoots make up the garnishes.

The program began when Kenmin Foods was put in touch with Boston ramen shop owner Masuo Onishi, who later oversaw the ramen project.

Onishi was having trouble designing a bowl to serve to American customers wanting a gluten-free option, and a mutual acquaintance referred him to Kenmin Foods president Yuki Takamura.

A diet without gluten, a protein found in wheat, has become increasingly common, primarily among health-conscious people in the United States, as the practice is believed to aid in weight loss.

Capitalizing on this trend, Kenmin Foods plans to establish a customer base in the United States with the invention.

“We will gain a foothold for our overseas business with the launch of rice flour ramen,” Takamura said.

Kenmin Foods said that mainly customers in the Asia region source their rice vermicelli from the United States. For this reason, overseas sales currently represent only a tiny fraction of the company’s total sales.

The gluten-free noodle is reportedly already available at Onishi’s restaurant and is proving to be popular.

A set of two frozen bowls costs 2,600 yen ($20) after tax. Customers can purchase 10 units of dried noodles alone for 2,180 yen including tax. For purchases, go to the specialized Japanese site at (https://gf-ramen.jp/).