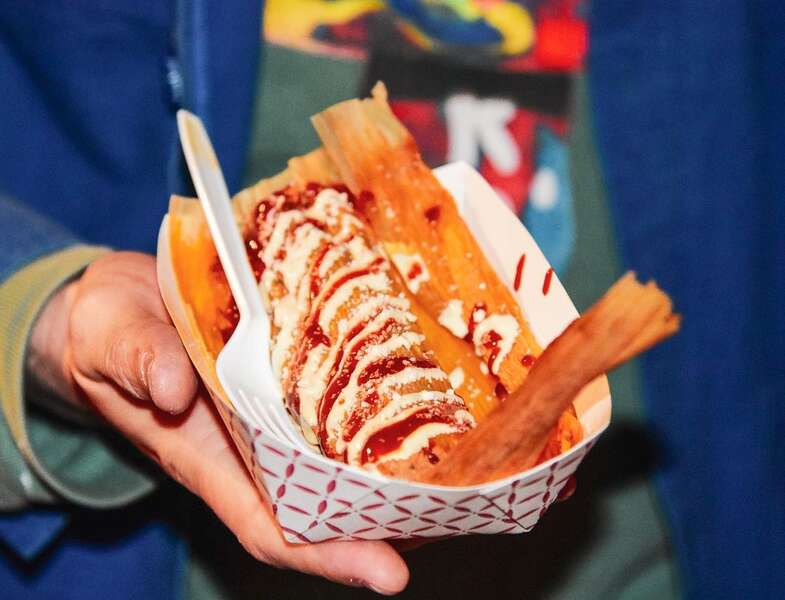 There’s a rising subculture in LA at the center of a convoluted Venn diagram of fashion, skateboarding, music and cacti, a head-on collision between Supreme-style commercial streetwear and Grateful’s hippie aesthetic. Dead, a hairy 24-year-old in a $60 tie-dye tee with a trowel in one hand and a blunt in the other. If those are your folks, you were probably at Eagle Rock last weekend, stationed in the parking lot of the Pillers building for an outdoor market hosted by the exuberant subculture crossroads clothing company, Ma®ket. .

But if you weren’t there for the pots, the pot, or the cacti, there was another magnet to draw you into that crowd: the tamales. In the back corner of the parking lot, past ceramic planters shaped like Jordans, past patchwork vintage flannel shirts, Yunia Funes Mata and her team tossed their fantastic masa bars from an artist-designed cart Angeleno Francisco Reyes Jr., aka Never Done.

Wine and Cheeseburger: Harley and Lara pair Falafel with wine

Mata has been making and selling tamales under the name Olmeca since the fall of 2020, after a fruitless search around Los Angeles for the tamales of her childhood led her home to Washington, D.C., on a research assignment. of recipes. She returned to Los Angeles and started making them herself, and everyone who tried them pushed her to make them public. So she started offering pickup and delivery through her DMs, then expanded to pop-ups at the request of Jen Yee of Baker’s Bench, who hosted Mata’s debut at her booth at Far East Plaza in November. 2021.

Olmeca’s menu has grown over time as Mata experiments and learns, testing new recipes and techniques. She’s also accepting requests—her new tamal is vegan, cashews in cashew-chipotle cream with roasted jalapenos, at the request of vegan friends who wanted to try her cooking and support her pop-up.

At Ma®ket last week, the menu included all of Olmeca’s new classics – birria, carnitas, rajas, beans and the new cashew vegan – served unwrapped and dressed in salsas, rigorously executed to exacting standards rigorous. That’s the thing with tamales; despite their apparent simplicity, they require a staggering amount of technique and precision.

Olmeca’s tamales hit dead center, balanced just like that but with plenty of punch. The masa has the right texture, firm and also supple, with a subtle flavor that isn’t too heavy to overpower its essential aspect. The toppings also show this balance, both in proportion and flavor. The birria gently buzzes with spice, the cashew crunch creates a unique textural contrast, and the roasted jalapenos add a subtle smoke and heat.

But it’s the carnitas that stick in the mind, bright with a citrusy marinade but very rich, with a few chunks of bark that hold their integrity through steam and gravy like a good pulled pork. The carnitas are also dressed in Mata’s excellent salsa verde, which comes with tomatillos and lime, and a herbaceous note that subtly hides underneath, a special bite.

A woman approached Mata with an empty cup of this salsa verde, holding it upside down to show him how carefully she had cleaned it. “What are you putting in there?” I could never make my salsa verde taste like this,” the woman said.

Mata hesitated. “My love,” she said with a knowing wink. If only that was all it took to make tamales like these.

Try Olmeca’s tamales at Ambitious Ales Brewery in Long Beach this Friday, May 13 at 5 p.m., and follow Mata on Instagram to stay up to date with upcoming pop-up dates.

Ben Mesirow is an Echo Park native who writes for TV, fiction, food, and sports. At one time or another his writings have appeared in The Los Angeles Time, liter, McSweeney’s Internet Trend, Los Angeles Magazineand engraved on dozens of desks at Walter Reed Middle School.