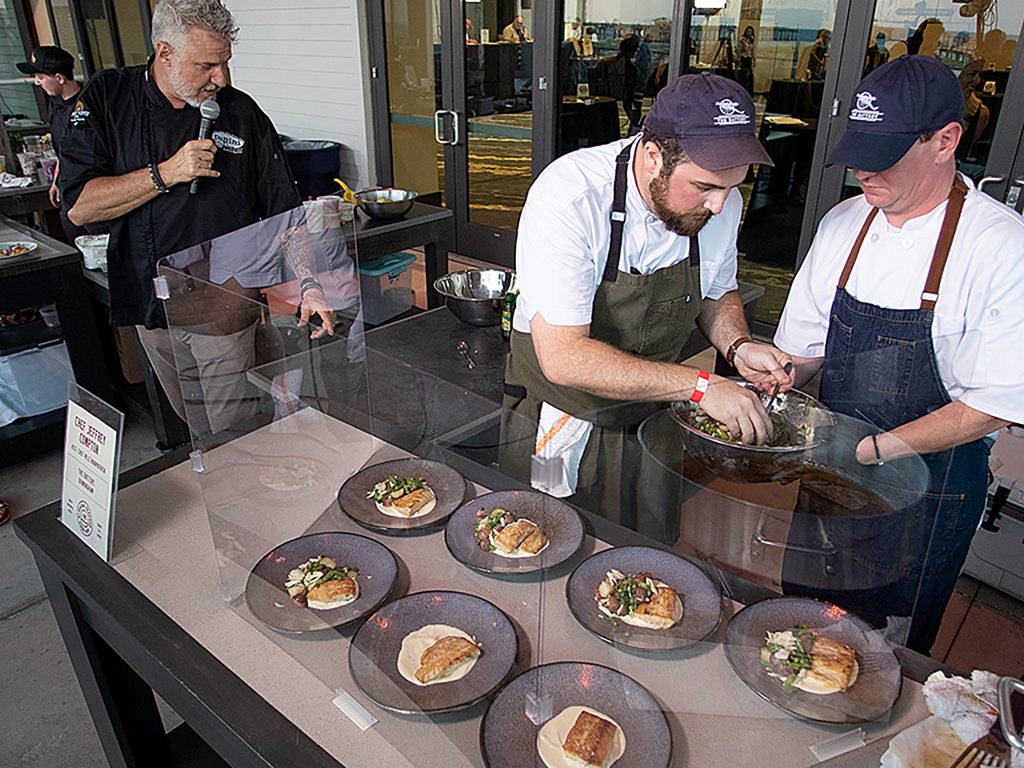 By David Rainer, Alabama Department of Conservation and Natural Resources

The four finalists of the recent 7th Alabama Seafood Cook-Off at The Lodge at Gulf State Park gave the five esteemed judges a tough task to determine who will represent the state at the Great American Seafood Cook-Off in New Orleans.

With a variety of creative dishes to sample, judges voted the most traditional dishes as the best creations, awarding Jeffrey Compton of Homewood’s The Battery restaurant the top prize of $2,500.

Contestants were given one hour to prepare their dishes, and presentations were awarded up to 20 points each in five categories: presentation, overall impression and mode of service; creativity and practicality; composition and harmony of ingredients; correct preparation and know-how; and flavor, taste and texture. The teams started preparing the dishes at five-minute intervals to allow the judges to taste the dishes as soon as possible.

Compton, who was assisted by Kyle Kirkpatrick, grew up in the Florida Panhandle and went to Auburn University to further his education. However, he was drawn to the kitchen of Restaurant Acre in Auburn and developed his skills in food preparation before opening a new restaurant in suburban Birmingham.

“I grew up in Destin working on the beach, so I’ve always been around rockfish,” Compton said. “I used redfish because it still has that white flesh, but it’s a little firmer. That’s why I poached it in butter. I accompanied a nice salad of light blue crab and potatoes. I thought those two were fine for balance.

“I really wanted to showcase the fried green tomatoes, and I wanted to do it in a way that took it to the next level,” said McWaters, assisted by Blaze Farrell. “I decided to pack the red snapper. This is where the inspiration came from. I pan-fried my red snapper. I took it out and wrapped it in green tomatoes. I dipped it in buttermilk and coated it in a cornmeal mixture and fried it. 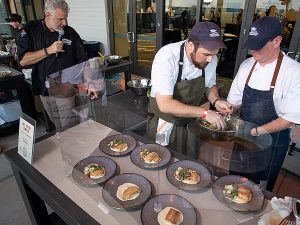 Chef Jeffrey Compton and his assistant Kyle Kirkpatrick put the finishing touches on the winning dish during the Alabama Seafood Cook-Off at the Lodge at Gulf State Park. (Photo courtesy of Billy Pope)

“When I think of Alabama, I think of fried green tomatoes. I used snapper because it has soft, white flesh.

“I did this because I thought it was very different, and Hispanic cuisine is close to my heart,” said Adams, assisted by Liz Brody. “I added the crab to the tamal with tomatillos and jalapeños with vinegar to add a super bright acid to stand out from the rich black garlic. We used some lovely Royal Red Shrimp in the pico to get the richness of the And the oyster emulsion is just a full creamy experience in terms of textures.

“Every component of the dish has some influence from the ocean,” said Nicolaisen, who was assisted by Fernando Justiniano.

Judge Chris Nelson, whose family has been in the seafood business since the late 1880s, said it was difficult to determine the best dishes in the competition and winners were chosen by very slim margins.

“I thought it was a great representation of all the seafood available here on the Gulf Coast, especially here in Alabama,” Nelson said. “I particularly liked the shrimp dishes, but I’m a bit biased in that direction. The fish was excellent. Everything was really well prepared. I was impressed as the environment they had to cook in was probably not at all where they would normally prepare these dishes.

“All of my scores were within one point of each other. I had a tie, and they asked us to rank it to break the tie. I made a call on how practical the ingredients were. Some of the preparations were really complicated, which was a bit embarrassing, but everything was delicious.” 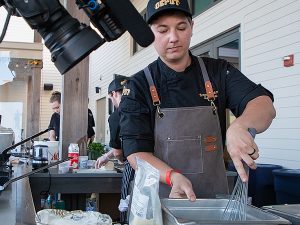 “Everything was really delicious with beautiful presentations all around,” said Simpson introducing the winners. “What a great group of competitors and cooks to represent Alabama. It just shows the level of young talent the state is developing. It’s very encouraging.

Chris Blankenship, commissioner of the Alabama Department of Conservation and Natural Resources, oversees the Alabama Seafood Marketing Commission, which was established in 2011 to promote Alabama’s seafood resources. Commissioner Blankenship said he was pleased with the competition and the support from everyone who loves Gulf seafood.

“It was great to have the competition at The Lodge at Gulf State Park,” Commissioner Blankenship said. “We have all these great chefs right on the edge of the Gulf of Mexico, taking these fine Alabama seafood products, preparing them with other Alabama products, like produce and fruit. When they use their creativity and talent to put this together in a dish, you know it’s going to be spectacular.

“I think all four participants did a really great job. They struggled to pick a winner. But Jeffrey Compton has cooked a great dish, and he’s going to represent us in New Orleans against the rest of the states in August to try to be the king of American seafood.