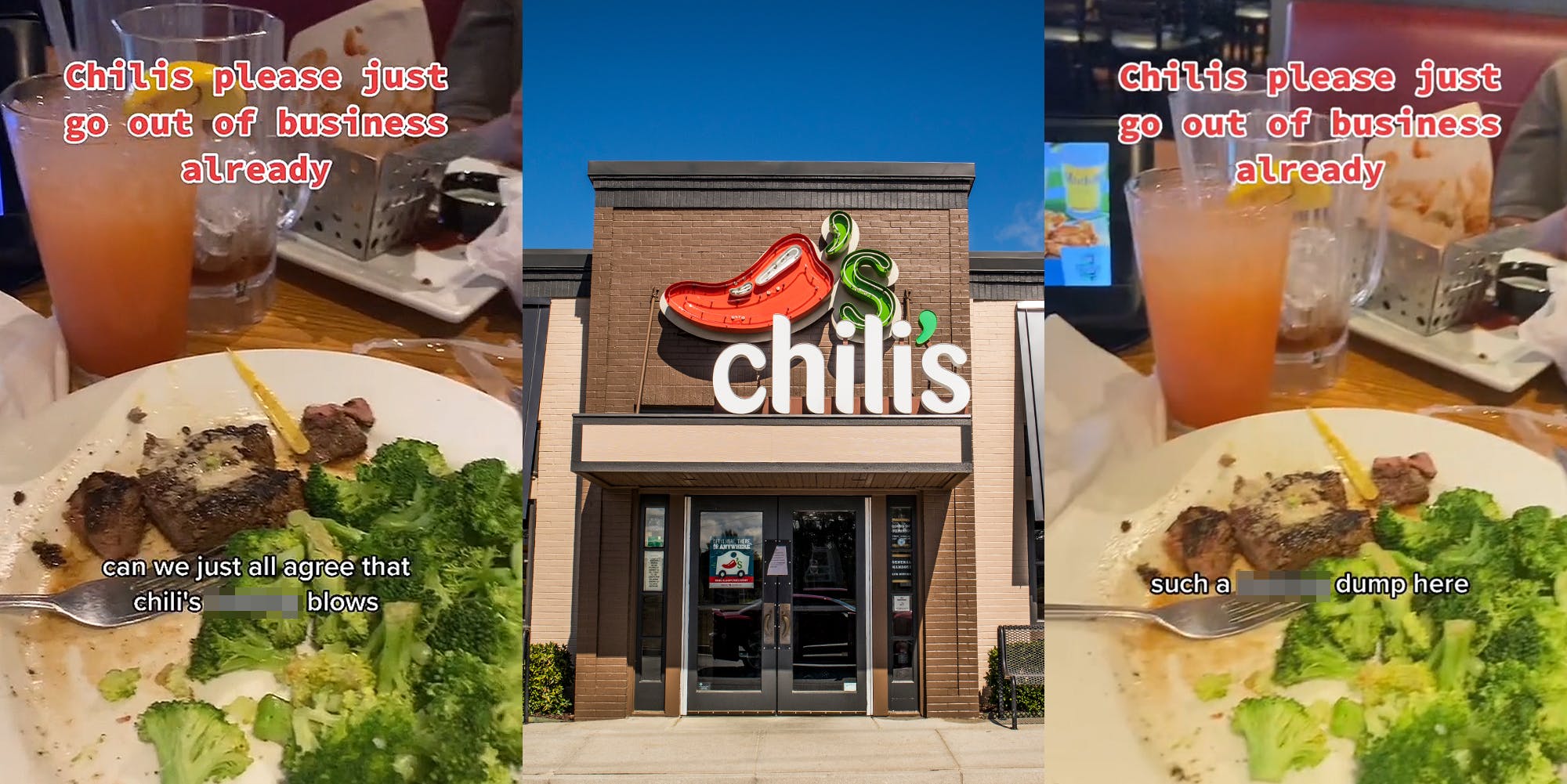 A woman has gone viral on TikTok after sharing her thoughts on Chili’s, broccoli and steak.

The video was posted by user Stephanie (@nativehoney01). She films her table at a Chili’s, which shows a plate of mostly eaten broccoli and steak. She evacuates her thoughts by filming the table.

“Can we all agree on fucking fucking Chili?” Stephanie asks her 10,000 followers. “Every time I come here, I say I will never come back. A fucking dump here.

The text overlay elaborates on his feelings for the restaurant, reading: “Chili, please go bankrupt already.”

The video garnered more than 373,000 views on Sunday, leaving viewers divided, with many defending the restaurant.

“I love my chilies, go there at least once a month,” said one viewer.

“I can’t understand, my town’s chili is amazing. Ranch bacon quesadilla salsa and always fresh fries, and their burgers are bomb!!!” a second wrote.

“Idk, I have the best time ordering the cheap margaritas, the free fries and salsa with their app, and the cheap burgers,” a third commented.

Some have criticized Stephanie for always coming back to the restaurant despite claiming to hate it. Many called her for the food she ordered.

“But you said you always go back,” observed one.

“Lol don’t order broccoli and steak at a cheap restaurant?!” said another.

“You don’t go to chile for broccoli,” echoed one user.

“Why not order a steak at a steakhouse?” asked a viewer.

However, there were others who jumped to Stephanie’s defense, agreeing with her.

“Man, I’m so okay with it,” one person confirmed.

“Every pepper near me is half-empty tables and a 45-minute wait,” criticized a second.

“I’ve been there once and will never go back, the food took over an hour to come out and it was all cold,” said a third.

“My son worked at Chili’s. He said they didn’t cook anything, everything was reheated,” another shared.

Stephanie told the Daily Dot via email that her video took place in Lake Elsinore, California, Chile. According to Stephanie, this was the last time she entered a Chili’s restaurant and she said the only reason she decided to go was because it was the only sit-down restaurant in the area and that she wasn’t looking for fast food.

“I got so many negative comments about it being my fault for going back and also ordering steak and broccoli,” Stephanie said. “My response is that it had been a few years and there was a new menu, so I tried to give it the benefit of the doubt and try it again.”

Stephanie explains that it’s not just the food that has disappointed her – she claims the restaurant “stinks”, the tables are always sticky, the service terrible and the bathroom dirty.

“They sat us at a small table and brought 4 waters (which we didn’t order) and 2 sodas for my son and said here you go so you don’t have to ask for refills and you left before that we were asking them to take them back,” she continued.

Stephanie also said her cocktail tasted horrible and the “cold and hard” food, of which she only had two bites, took forever.

“I know chili peppers are known for their fried comfort food, but I was looking for a healthier option and figured if it was on the menu they should know how to cook it properly,” Stephanie wrote. “Boy, I was wrong.”

The TikToker says she didn’t send the food or drink back because she just wanted to pay the bill and leave.

We crawl the web so you don’t have to.

Sign up for the Daily Dot newsletter to get the best and worst of the internet delivered to your inbox every day.

Melody Heald is a cultural writer. Her work can be found in Glitter Magazine, BUST Magazine, and more.