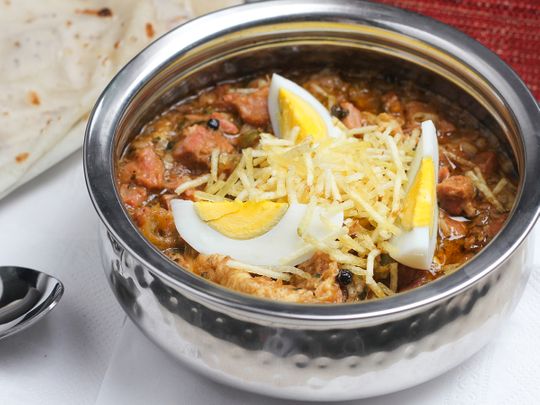 Bohra Indian cuisine is reminiscent of hot malai khaja (puff pastry cream), Khichda (simmered meat and lentils) and of course dabba gosht, which literally translates to mutton in a container. Made with juicy chunks of marinated mutton and whole Indian spices, the dish is topped with pasta, eggs and tomatoes, making it the perfect one-pot meal.

But how did this dish combine ingredients from different parts of the world?

Gulf News Food looks back at the origins of dabba gosht and we discovered that this dish became popular in India almost 100 years ago and has its roots in colonial times. It was a mix of Western cuisine and Indian spices – more like a dish cooked in a container.

Gulf News Food spoke to Dubai-based Indian expat Juzer Baldiwala from Mumbai, a home cook who specializes in Bohra cuisine and runs his own catering business. “Dabba gosht was featured as a commercial dish in a Mumbai-based Parsi restaurant. It was made with deboned pieces of mutton, then topped with potatoes, tomatoes and eggs. However, few liked it. After a few years, it is claimed to have been reintroduced by a caterer with a slight twist in the recipe. The catch is that the caterer added Kaju or cashew paste with peas, to give the sauce a more nuanced texture. It was actually called mari gosht at first due to the addition of black pepper, but was changed to dabba gosht after being made in a container.

A steel container is all you need

As Baldiwala said, the distinct quality of this dish apart from its flavor is that it was prepared in a stainless steel container. We also spoke to Arafat Mansuri, the owner of Delhi Darbar in Dubai, who said: “One of the main things to note about this dish is that it is always prepared in a stainless steel container or dabba. Initially, people combined these ingredients, layered them and then steamed them in large dabbas in the past. The mutton would still be cooked in a separate pan with whole spices after marinating. Today we follow the same process, using traditional vessels. This whole process of cooking the meat and then steaming it after layering was introduced at least 50 years ago.

“Plus, it’s also like Italian lasagna, except our version is juicier because we add curry. When cooked at home, the recipe varies from family to family, where some replace the mutton with chicken, but the process is always the same.

Apart from its flavor and ingredients, the preparation of dabba gosht is also quite unique. “The unique dish has a distinctive style of preparation,” explained Dubai-based Bohra food blogger Rashida Badlawala, known as @rashiablogs. “After layering the meat and the noodles, pasta or lasagna sheets, we crack a few eggs on top of it and pour sizzling ghee or clarified butter or oil over the eggs and let it cook. It is quite similar to kheema lasan or minced mutton with green garlic that we make. Some even use hard-boiled eggs.

The one-pot dish has a characteristic preparation style

Dabba gosht also uses a sauce similar to the French bechamel sauce, except it is made with Indian spices – which are optional – and cheese. “This [dabba gosht] can also be made with pasta or noodles of your choice. Since it combines the goodness of mutton, pasta and sauce, this dish is also very convenient to prepare. For us Bohras, mutton also holds a very special place. In fact, most of our dishes use mutton,” Badlawala explained.

One of the key factors to note about this dish is that it is always prepared in a stainless steel container or dabba. Initially, people combined these ingredients, layered them and then steamed them in large dabbas in the past.

Although it combines many different ingredients, dabba gosht does not take long to prepare and can be useful when time is short. “It’s easier to do than it looks,” explained Nafisa Mustafa, another 35-year-old Indian expat food blogger from Baroda, Gujarat. “Most people think that because the dish combines so many ingredients, it can be very difficult to make, but it’s actually easy to make once you get the hang of it. It’s also important to note that dabba gosht is best made with fresh mutton, not frozen mutton, as it can take a long time to thaw and absorb flavor.

A well-kept secret with sentimental value

Some believe that this recipe fades over time as it is reserved for the Bohra community. However, for these expats, the dish holds a very special place in their hearts and take every opportunity they have to share this dish with the world. “Dabba gosht is actually a fun dish, if you ask me,” Badlawala added. “I call it fun especially because when I was a kid I used to look forward to the days when we did this – it was served in an unconventional way, where we used to to eat it from a container and it had the element of cheese, plus it still looked like a pie or pudding which was easy to eat as it was boneless unlike other dishes.

For Mustafa, preparing this dish in the UAE also helped to enhance the flavors of the Middle East. “I think my fondest memory of making this dish is actually when I came here. My mum makes a pretty simple version of it, but when I made it for mum during her visit to Dubai, she m said it was better than his version. I think it’s because the UAE has always been a hub for some of the freshest ingredients – be it meat, vegetables or even spices. Today I am able to make dabba gosht which I am sure will suit the Middle Eastern palate perfectly.

Finally, when served, dabba gosht tastes best when eaten as is, but many like it served with fresh bread or steamed rice or roti (unleavened flatbread). Make it at home with this recipe from Delhi Darbar.

Do you have a favorite dish that you would like us to feature? Share it on [email protected]