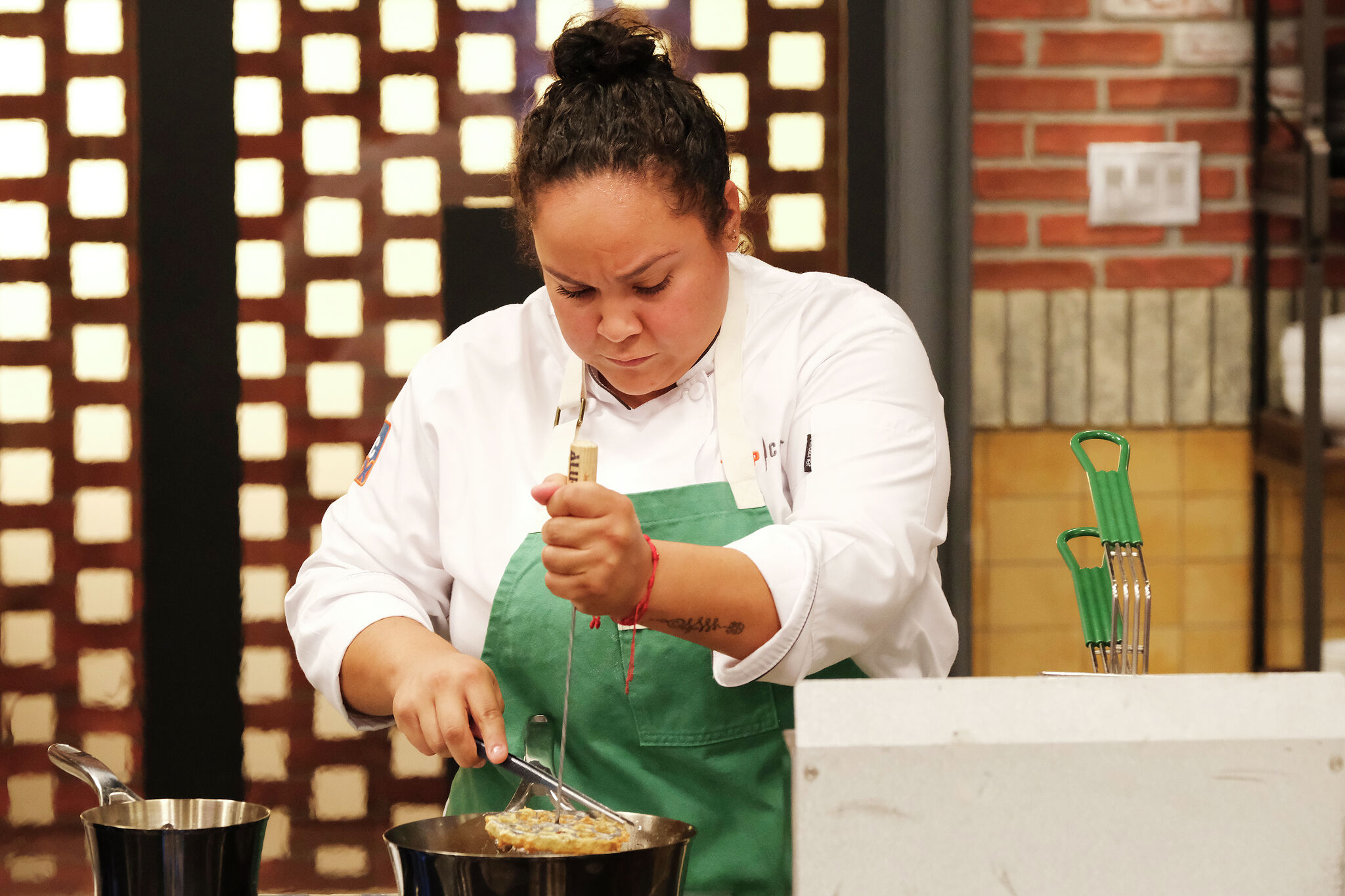 As Houstonians, we always support Houston – all of Houston, all the time, no matter what.

But on this season of “Top Chef,” there’s no harm in finding a home for our patronage. Her hometown chef, Evelyn Garcia, lets us cheer her on, smile and laugh with her, and relate to her knowledge of all things Houston and Texas.

In a challenge on this week’s episode, in which each chef had to create a dish based on a variety of pioneering Texan women, Garcia pulled the name of music queen Tejano Selena from the knife block.

“Texas Latina has Selena? That’s pretty badass,” Garcia admitted in the confessional with a twinkle in her eye. At that point, we knew she was serious.

For her dish, Garcia created an aguachile inspired by one of Selena’s most famous songs, “Como la Flor.” Literally translated as “like the flower”, the tune alludes to dying love, which the singer likens to a withered flower.

An aguachile is a Mexican dish similar to South American ceviche, with one important distinction: the latter is marinated in citrus juices that “cook” the raw fish, while the former is quickly tossed in.

Selena de Garcia’s inspired aguachile hit all the notes, nodding to Texas and Mexican inspirations while weaving together the chef’s expertise in Southeast Asian flavors. The components of his dish were elegantly layered, sitting in a cold broth made from green cucumber, with drizzles of chipotle chili oil. The chef chose Texas Gulf snapper as her fish of choice, which she mixed with Asian pears and chives. This rested on a base layer of mashed avocado with orange zest. She sprinkled crispy plantains on top, then thinly sliced ​​radishes arranged like a flower, in reference to Selena’s song.

Garcia served her dish to a panel of guest judges that included none other than Selena’s sister, Suzette Quintanilla. No pressure.

As host Padma Lakshmi noted later in the episode, Garcia’s personal connection to Selena really worked in her favor. Quintanilla even remarked that Garcia’s love for the late singer showed in the final dish.

Garcia explained that music star Tejano was a huge influence on her and other Mexican Americans in Texas, and revealed that she even dressed up as Selena five years in a row for Halloween.

“Growing up as a first-generation Mexican-Salvadoran American, it’s hard to know and navigate: Are you Mexican enough? Are you American enough?” Garcia said in the confessional. I feel like Selena made it easy for us.”

The Houston-born chef’s knowledge and appreciation for Texas culture is what makes her a perfect local candidate to put down roots in this season of “Top Chef.” She understands the duty every time.

In contrast, the queso-hating, brisket-crushing California chef known as “Jackson Kalb” keeps the collective eyes of Texas rolling. When his stabbing led him to pull legendary former congresswoman Barbara Jordan’s name for inspiration, he announced it flatly and unenthusiastically, making us wonder if he even knew who she was.

But Garcia understands. It was a pleasure to see his face light up, his knowing nods and excited gasps when an aspect of his hometown or state is mentioned, such as when Laskhmi announced a theme at the Asian night market, or a legendary Houston chef such as Dawn Burrell, Chris Williams or Christine Ha is featured.

Garcia’s passion and talent are reflected in the plate. The Selena-inspired aguachile gave Garcia the win for a second consecutive bout. As guest judge and Dallas leader Tiffany Derry said, “Everything just sang.”