A monthly column written for Beef Central by US meat and livestock market commentator Steve Kay, publisher of US Cattle Buyers Weekly

Stroll through any suburban neighborhood in America this month and you’ll get a sense of what America’s favorite pastime is.

May marks the start of the annual grilling season and millions of people will be cooking everything from beef steaks to ground beef patties. And yes, there will be plenty of pork chops, hot dogs, and even chicken thighs and wings.

Americans, as readers may know, love grilled meat almost as much as you Australians, and burgers in particular. The number consumed annually at home, in restaurants or on the go is approximately 50 billion.

So it’s worth asking how the burger became a staple of the American diet.

George Motz, a burger specialist of sorts, has spent more than 20 years of his life traveling across the United States in search of burgers. According to Motz, the history of the burger begins in 13th century Mongolia, when the Mongols and the Tatars were fighting.

“Apparently, the Tatars had a strong taste for raw mutton. They rode all day with raw mutton under their saddles. When they finally set up camp, they would take this raw, hot mutton, chop it up, probably add some spices or something and eat it that way,” he says.

I wonder if the early settlers in Australia did that too.

By the way, I grew up eating mutton on my family’s farm on the Banks Peninsula in New Zealand. My father rarely harvested a lamb for our table because he considered them too valuable.

I always like lamb. One of my all time favorite dishes was a few years ago when I cut a rack of Aussie lamb (purchased at Costco) into cutlets and spiced and grilled them over an open fire in a campground at 6000 feet in the Sierras of California. Needless to say, we washed them down with a Hunter Valley Shiraz.

Back to the origins of the hamburger. The dish eventually made its way to ship workers and ports bordering the Baltic Sea, allowing it to reach more western parts of Europe, including Scandinavia. From there it made its way to Germany and the port of Hamburg several centuries later.

The dish then changed from raw mutton to cooked ground beef, known today as frikadellen. As German migrants waited for their ships, they ate frikadellen as a cheap and tasty meal option. When they left Hamburg for the United States in the mid-19th century, the migrants brought with them their knowledge of the dish.

“So they had to change the name at that time to ‘Hamburg-style steak’ or simply, Hamburg steak.”

As German migrants moved west across the United States to farm, state fairs also began to appear. Farmers from all walks of life attended these fairs to learn about different farming practices and equipment.

According to Motz, German migrants set up their own stalls serving Hamburg steak, considered an ethnic food at the time. While hot dogs predate hamburgers as fair food, Motz says he thinks the hot dog inspired several places to eventually start putting Hamburg steaks on bread, making them Hamburg sandwiches and possibly burgers.

No one can say for sure who did it first. There were about seven to nine claims throughout the Midwest, from Texas to Ohio and Wisconsin, too many claims, Motz said. Unfortunately, there’s no way to definitively prove who put Hamburg’s first steak on a bun. It happened everywhere at the same time, and no one was talking about it. The trend caught on and restaurants started serving the sandwiches.

Burgers are now a pride of American cuisine, says Motz. It’s pretty much the only food invention in America in the last 100 years. It started as an ethnic food from Germany, but the United States took it and made it different by putting it on bread.

This grilling season, Americans may be turning to burgers more than ever due to the much higher price of steaks. Additionally, monthly beef prices in the United States so far this year have been well above last year’s prices.

These prices drove down prices from consumers, who focused on buying more ground beef and cheaper cuts and less on high-priced steaks.

That could change in May with more aggressive retail pricing. But analysts fear some consumers have already been pushed out of the higher end of the retail beef market.

Not so long ago, the price of ground beef averaged US$2 per pound.

Editor’s note: Readers familiar with the Japanese beef market will be familiar with “Hamburg steak” – a thick, seasoned beef patty served without the bun – a mid-tier Japanese restaurant dish popular across the country, in which Australian beef plays an important role. See image below. 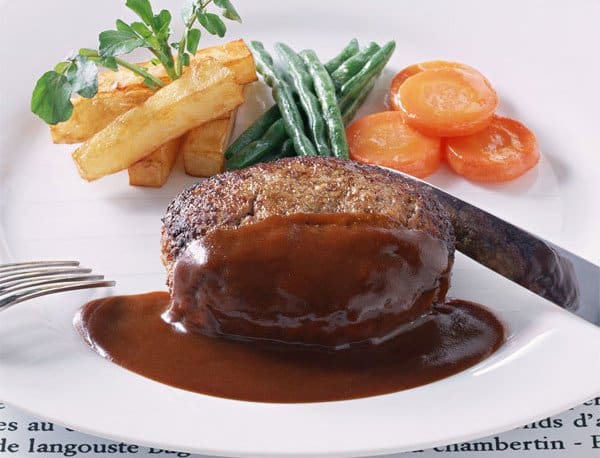