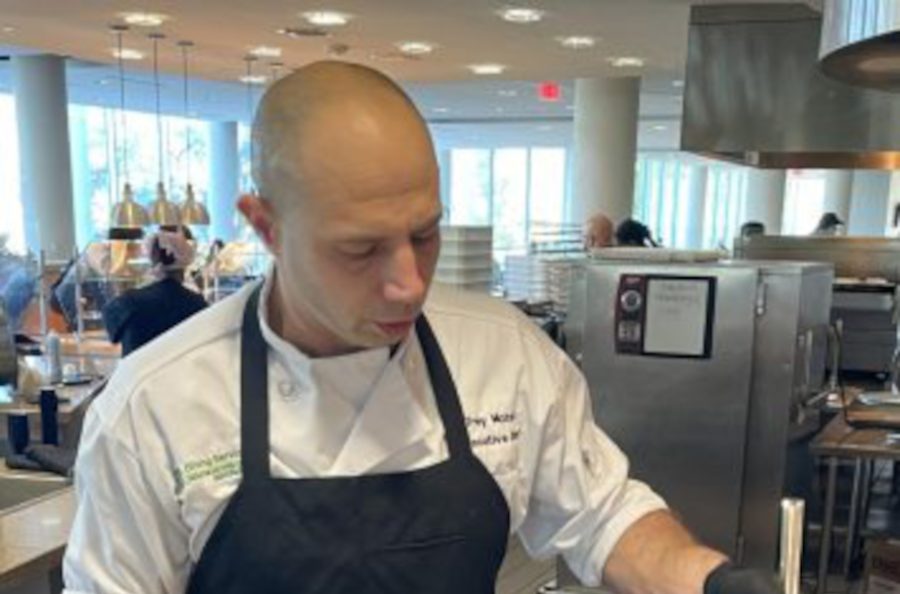 Chef Trey Moses recently joined the Southeastern community as the new Executive Chef of the Mane Dish and looks forward to sharing his passion for food and cooking with students and colleagues.

Moïse was introduced to the culinary world at a young age, thanks to his mother. She taught him all the basics of cooking, from cutting ingredients to making sauces from scratch. She was a significant influence in his discovery of his love for cooking.

When Moïse was 15, he started washing dishes and preparing food for Vincent’s Italian kitchen on the way to his home in Metairie. Just two years later, Moses was offered the opportunity to become a waiter or work in the kitchen. Her background in food preparation influenced her choice to work in the kitchen.

“I helped them prepare. So, carving veal, making cannelloni, making pasta, pretty much whatever they needed on a large scale. It was ‘Hey Trey! Come here, ‘this is how you do it,’ then repeat it 500 times,” Moses said.

Moses rose through the ranks at Vincent’s location in New Orleans until he graduated from high school and then attended Louisiana State University. Meanwhile, Vincent opened a restaurant in Baton Rouge and invited Moses to be the chef.

Originally, Moses attended Loyola for his first semester on a basketball/baseball scholarship, then transferred to LSU after a sports-related injury. Moses went on to study at LSU and earned a studio art degree in 2004.

“I never thought I would be a chef. I like drawing, sculpting. I really like creating works of art and I have always considered cooking as a job. Cooking has always been something for which I was good, I never recognized it,” Moses said.

Moïse continued to work for Vincent until he was 27 years old. During this time, he was able to create and experiment with new menus and dishes inspired by his artistic training. In 2007, Moses decided to attend culinary school at Delgado Community College in New Orleans. He then completed an internship at the famous Palais des Commandeurs in the French Quarter.

There, Moses was introduced to the history and processes that led to the creation of his favorite southern dishes. He also learned to order a kitchen and to work in a team.

After graduation, Moses opened several restaurants in the South; however, he decided to return to Louisiana and follow his career closer to home and family.

Shortly after returning to Louisiana, Moses accepted the executive chef position at Aramark in 2022 and was placed at the Mane Dish.

“My mother always thought I should teach. Being able to work in a school where I can actually teach and work with people and work with staff members is really what drew me here,” Moses said.

Moses said he enjoys creating foods that bring people together, and the Mane Dish allows him to create a variety of foods for everyone. He also focuses on building relationships with his team to create a positive and efficient environment for his staff.

“We will do it together. I’m not a person who will just sit in the office and bark and yell. I’m more than happy to go to the line and work with them and be with them when we fail and succeed,” Moses said.

Moses takes a similar approach in his interactions with students and faculty. He enjoys talking with people and will answer any questions anyone has about what is being served. Moses also takes dietary requests and encourages students not to be shy if they want to talk to him.

Moses explained, “I call the students ‘guests’ because they are the reason we are here. I don’t want them to think we can’t do these things. I am always accessible.

The Mane Dish displays its menu on the Southeastern website weekly for students. They also host pop-ups once a week which is a chance for students to try new things or for international students to sample a dish from home.

Chef Trey has many exciting plans for the Mane dish and is eager to share them with the Southeast community. For more information on the Mane Dish and their upcoming events, visit Catering services or their Instagram @southeasterndining.