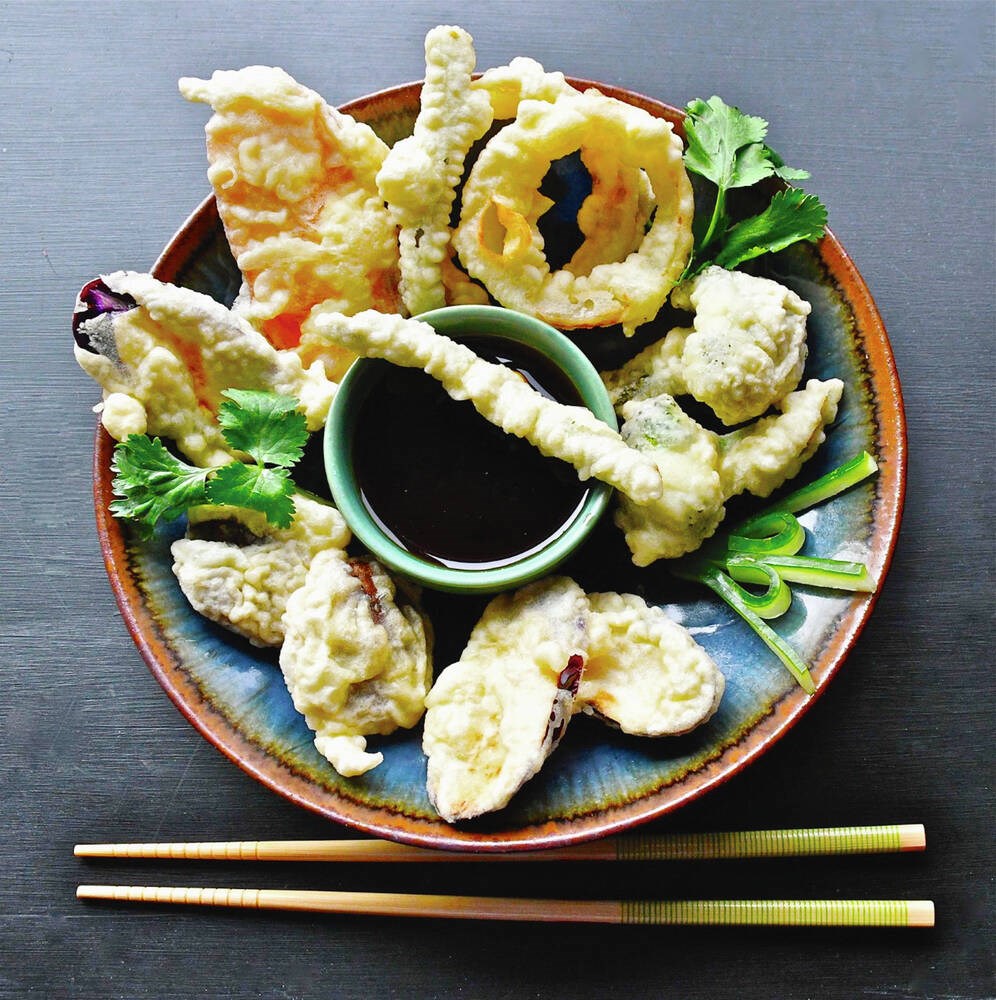 Breaded fried vegetables, fish was first served in Japan by Portuguese missionaries in the 16th century

If the produce drawer in your refrigerator is full of vegetables, do what I did and use some to make delicious tempura.

It is a Japanese dish where vegetables and other foods, such as mushrooms and shrimp, are dipped in batter, fried, and served with a dipping sauce. The Japanese have been making tempura for hundreds of years. How it became part of their cooking is an interesting story.

According to several sources, in the 16th century, Portuguese missionaries came to Japan, bringing with them their traditions and cuisine. One of these traditions observed the days of embers, Qautuor Tempora in Latin, the four feast days of the Catholic calendar, during which meat is not on the menu.

On those days, tradition suggests that missionaries prepared fish and vegetables as they did at home, coating them in batter and frying them. This technique was new in Japan at the time. But it eventually became very popular and became known as tempura, derived from the Latin word Tempora.

Based on the book by Lesley Downer Among the Japanese Table, the Japanese improved the technique by designing a lighter dough and cooking with lighter oil. They clearly found something that people loved, as tempura is now a staple in their kitchen and is served and enjoyed in Japanese restaurants around the world.

As with any dish that has been prepared for centuries, the way tempura is prepared can vary from cook to cook, recipe to recipe, primarily in how the batter is prepared.

In the dozen or so recipes I looked at, some pasta was simply made with flour, eggs, and water. Others have used egg yolks instead of whole eggs. In some recipes, a low-gluten cake flour was needed. In others, a mixture of all-purpose flour and cornstarch was used to create this low gluten content, which is believed to result in a crispier, less mushy batter when fried.

In some recipes I’ve read, including some of mine in the past, starter cultures, such as baking powder and sparkling soda water, instead of still water, were mixed together, in an effort to make puff the dough when fried. And, in some other recipes, the batter was mixed until smooth, while many others remained a bit lumpy.

There were other differences, such as the thickness of the dough. But one thing that was agreed upon in all the recipes I read was that the tempura batter should be very cold. Because when that cold batter hits the hot oil, it causes a bigger reaction, making it crispy and light.

In today’s recipe, I opted for a tempura batter that was still a bit lumpy after being mixed. When fried, it creates attractive jagged edges on vegetables. Speaking of these vegetables, there are many different types that can be used to make tempura, as listed in my recipe’s ingredient list. Just choose the ones that interest you. Mushrooms, such as shiitake mushrooms, can also be used.

Serve this tempura as a snack or appetizer, or as a main dish, with rice and a salad, such as Japanese-style coleslaw.

Cooking time: three to four minutes, per batch of tempura

Prepare the tempura dip by combining its ingredients in a small saucepan. Bring to a boil over medium heat. Remove from heat and set aside until needed.

Place a wire rack on a baking sheet. Place vegetables on a second baking sheet, sprinkle with 1 tbsp flour and toss lightly to coat each piece. Heat the oil in your deep fryer to 350 F (see Eric’s options). Preheat your oven to 200F.

Mix the 3/4 cup flour, cornstarch and salt well in a bowl. Place a second bowl in a larger bowl of ice cream (this will help make the batter very cold). Add the egg and beat well. Now beat in the water. Add the flour mixture and mix with a fork until a slightly crumbly dough forms.

Footnote 1: Dashi is a broth made from bonito – dried and fermented tuna flakes. Packets of powdered bonito that you can use to make quick dashi are sold at Japanese food stores, such as Fujiya at 3624 Shelbourne St., and some grocery stores. I bought a pack of Hondashi brand bonito soup broth in the Asian food aisle of Fairway Market. Mix 1/2 teaspoon with 1/2 cup plus 2 tablespoons boiling water to get the dashi you need for the tempura dip.

Footnote 2: Mirin, a sweet sake-based condiment, is sold in the Asian food aisle of most supermarkets and in Japanese food stores.

Eric’s options: If making your own tempura dip bothers you too much, you can buy ready-made bottles of tempura dip, like the Kikkoman brand, in the Asian food aisle of some grocery stores. If you don’t have a deep fryer, place about four inches of vegetable oil in a pan about eight inches wide. Set to medium-high heat and heat the oil to 350 F. Adjust the heat as needed to maintain this temperature. Carefully fry the tempura, in batches, as described in the recipe.

Eric Akis is the author of eight cookbooks. Its columns appear in the Life section on Wednesday and Sunday.