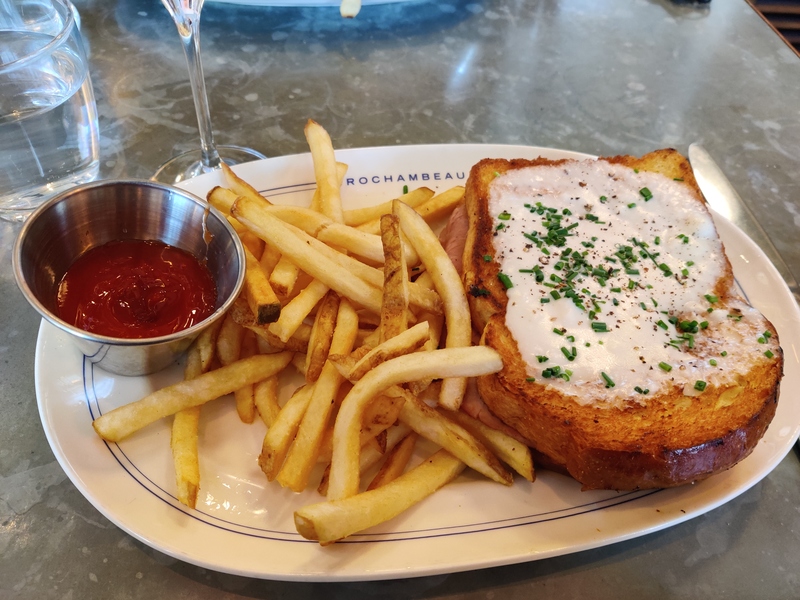 Beautiful and many but not outstanding

By Arun Wongprommoon and Mindy Long

by Arun Wongprommoon and Mindy Long

The trip to Rochambeau was long. Technology was originally invited to a guest chef popup brunch, and we agreed to attend. When we arrived, however, we found an empty restaurant. A member of staff, Tyler, came to greet us and informed us that the chef had canceled at the last minute. Apparently he didn’t have enough time to inform us of the change. Instead he offered us breakfast burritos and matcha latte. It turned out that because the chef was not present, Rochambeau was closed except for three employees, including Tyler. Obviously, they were completely unprepared for this unexpected circumstance. As expected, the breakfast burrito was tiny and wrapped in foil, barely comparable to a store bought burrito, and its taste matched its appearance. The matcha latte lacked both flavor and depth.

Rochambeau apologized for the incident later that day and invited us to lunch on the day of our choosing. We crossed the bridge again the following afternoon and were greeted by Tyler on the stage of a Rochambeau vastly different from the one we had seen the night before. We were seated on the second floor and admired the lively Art Deco decor.

For a drink we ordered a glass of NV Quady Orange Muscat, a sweet wine or a dessert wine. It was exactly what it sounded like: a sweeter taste, almost grape juice, with a tiny hint of wine. The wine whetted our appetites, so we were somewhat prepared for the deluge of food that followed. Our first round, two appetizer plates, arrived promptly. Since Rochambeau is a French restaurant, we were forced to order the escargot. The snails were chewy and buttery but not as tasty as expected. The bread served with it was hard and dry, prompting us to rate the Parisian classic a 3.5 out of 5. Our other appetizer was the basil avocado smash, essentially a fancier version of an avocado with an egg which we had asked for harder. We also gave it a rating of 3.5 out of 5. The smoked salmon was good quality but we couldn’t taste any basil in the dish. The avocado was not creamy and very salty. The bread was, again, hard and dry. Long story short, the dish tasted like average avocado toast for more than double its usual price.

Then the entrees came, and they came fat. Mindy ordered the steak frites, a medium tenderloin with gravy and garnish, as well as fries and ketchup. The cut was medium and stringy. Overall we gave the dish a 3 out of 5. Arun ordered the croque monsieur, a French classic. The croque monsieur bread made up for the other breads we had – it was buttery, soft and toasted just right. The restaurant was very generous with the ham, which was rich and salty. You could count up to four layers of ham in the dish. The cheese doesn’t stand out as much. What elevated the dish from being a glorified ham and cheese sandwich was the béchamel sauce and the filling on top, which was a bit sour, gooey and stretchy. As for the fries, we were happy with the crispy, golden exterior, and they were salty enough for our liking. We gave the croque monsieur a 4 out of 5.

Just as we were finishing our meal feeling stuffed, the restaurant surprised us with a free soup, the Onion Soup au Gratin. In a characteristic brown ceramic pot, the stretchy burnt cheese oozed out, making us hungry again. Beneath the dairy layer was an extremely rich base of soft meat and crispy croutons. We enjoyed the presentation, but more importantly the taste was near perfect. Our sample of French Onion Soups is small, but we’d say Rochambeau is the best we’ve had so far, so we’ve rated it 4.5 out of 5.

Rochambeau gave us a taste of French Boston cuisine. As Mindy has just returned from a trip to France, our judgment may be harsh but certainly honest. Rochambeau left more to be desired, given their initial mishap and lack of quality ingredients, especially bread, a staple of French cuisine. Be warned that Rochambeau won’t be as kind to your wallet as your taste buds. Rochambeau is an above average Boston restaurant, but while it’s beautiful and plenty, it shouldn’t be at the top of your list of restaurants to visit in Boston.