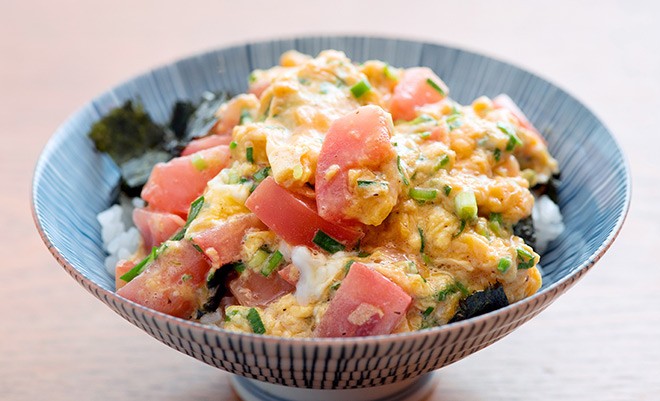 Editor’s Note: In the Taste of Life series, culinary experts, chefs, and others involved in the food business showcase their special recipes related to their life journeys.

The Japanese rolled omelette, known as “tamagoyaki”, is a classic dish loved by children. However, Hiromitsu Nozaki was not too fond of it.

The kind served at home was hard in texture and sweetened with sugar. Although eggs were so valuable at the time that people brought them as gifts to the sick, he did not like the dish.

He was in the upper grades of elementary school when he came across a completely different rolled omelet.

A neighbor cooked him a fluffy rolled omelette containing flour in exchange for custody of his son, who was five years younger than him. It was like “okonomiyaki”, Japanese savory pancake.

Cooked with green onion and Chinese chives, the rolled omelet was seasoned with soy sauce. Young Nozaki was struck by his good taste.

Around this time, gas became available at his parents’ home in Furudono, Fukushima Prefecture.

Although men rarely worked in the kitchen at this time, “I asked my neighbor how to do it and cooked in secret when no one was home”.

He managed to recreate the rolled omelet the first time he tried. After that, he started cooking whatever he wanted to eat for snacks.

This motivated him to become a cook, and Nozaki went to Tokyo to enter a training school for nutritionists.

After training, he became the head chef of Tokuyama, a restaurant in Tokyo’s Nishi-Azabu district offering pufferfish dishes, at the age of 27.

Photographers Tadahiko Hayashi and Shotaro Akiyama were among the restaurant’s frequent guests.

Akiyama once said to Nozaki, “Cooking and photography have something in common. They get the best out of ingredients and subjects.

Nozaki said, “What I learned from trading across the counter became an asset in life.”

Nine years later, he was asked to take charge of Waketokuyama, the new restaurant that serves traditional Japanese multi-course “kaiseki” dishes. Hayashi found the name of the restaurant.

For this week’s rice bowl, Nozaki revisited the rolled omelette he had at his neighbor’s house.

Not only enhancing the flavor by adding Chinese chives and tomato, he also paid attention to the coloring of red, green and yellow. The egg should go on the rice while it’s still half set.

Hiromitsu Nozaki: Born in 1953 in Fukushima Prefecture, Nozaki became the head chef of Waketokuyama in 1989. He has written books including “Oishiku taberu: Shokuzai no techo” (Enjoying food: Memo on ingredients), published by Ikeda Publishing Co.

1. Dice the tomato and cut the Chinese chives into 5 mm wide pieces.

2. Break the eggs into a bowl, add the tomato and Chinese chives and mix. Season with light soy sauce and pepper.

3. Pour the oil into the pan, put on the fire and pour in the egg juice. Heat until lightly cooked.

4. Serve the rice in a bowl. Tear up the dried seaweed with your hands and sprinkle over the rice. Place cooked egg mixture on top.

You can capture the sense of the seasons by changing herbal vegetables from Chinese chives to shiso leaves, “myoga” or daikon radish sprout (“kaiwarena”). Adding “edamame,” or green soybeans, is another fun variation.