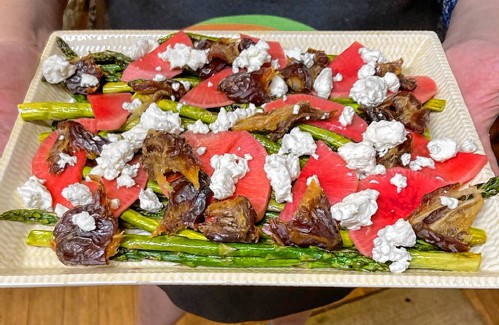 My mother always served asparagus at her seders, no matter when Passover fell on the calendar. Whether it was late March or late April, there was always asparagus. For her, it was spring break, and spring meant asparagus.

I decided to carry on the tradition and use his plate of asparagus at my seder table, although I know full well I actually had a doomed patch of asparagus in my yard before the asparagus didn’t have tend to appear in these parts until the very end of April. . But in honor of my mother, I serve it, but I’ve waited until now, when I know I have five opportunities for Hadley grass within a mile and a half of my house, for share it with you here.

Partly inspired by my 9 year old son for this dish. She’s had a signature dish for years: dates stuffed with goat cheese (or cream). This year, someone has tracked down extraordinarily divine Medjool dates for Passover. I pitted them then tore them into pieces over the roasted asparagus.

Touches of goat cheese followed the dates. Finally, because I love pickled things, especially with those soft, sweet dates, I scattered some quick-pickled watermelon radishes, which had turned a bright pink from the vinegar.

The quick pickle liquid here is the same one I use for red onions and jalapenos when I want to spruce up our Taco Tuesday quesadillas. It is definitely a file to classify for alternative uses. You’ll have leftover pickled radishes, which I’ve really enjoyed in salads and sandwiches.

Although cooking magazines and Martha Stewart push to cut the asparagus spear where it bends, I find it often eliminates nearly half of the spear. Personally, I cut a little above the woody end. I love roasting them for about 20 minutes in a very hot oven.

Served on a pretty platter (maybe you also have an asparagus platter), this dish turns a bunch of asparagus bought from a roadside stand into something truly special.

A bunch of asparagus, cleaned and trimmed

Half a cup of white sugar

Half a cup of white vinegar

Half a cup of water

Preheat the oven to 400F

Pour a tablespoon of extra virgin olive oil over the asparagus, then add a nice pinch of salt. Mix with fingers to combine. Roast the asparagus on a hot baking sheet for 18 minutes.

Arrange the asparagus on a platter. Pluck (or chop) the dates and arrange them over the asparagus, making sure they are spread evenly across the tray. Follow that with teaspoon-sized splashes of goat cheese, then halved slices of marinated watermelon radish (recipe to follow) over asparagus, dates and goat cheese.

In a small saucepan, combine the sugar, vinegar, water and kosher salt. Bring to a boil and make sure the sugar and salt are dissolved. A whisk helps with this step. Once everything is dissolved, turn off the heat, add the radish slices and cover the pan for two minutes. After two minutes, toss the radishes to redistribute them, then cover and let stand another 10 minutes.

You will have leftovers. Store them in their liquid in a small glass jar in the refrigerator. Use liberally in salads and sandwiches for the next three days or so.

Molly Parr lives in Florence with her husband and two young daughters. She has been writing her food blog, Cheap Beets, since 2010. Send your questions or comments to [email protected]