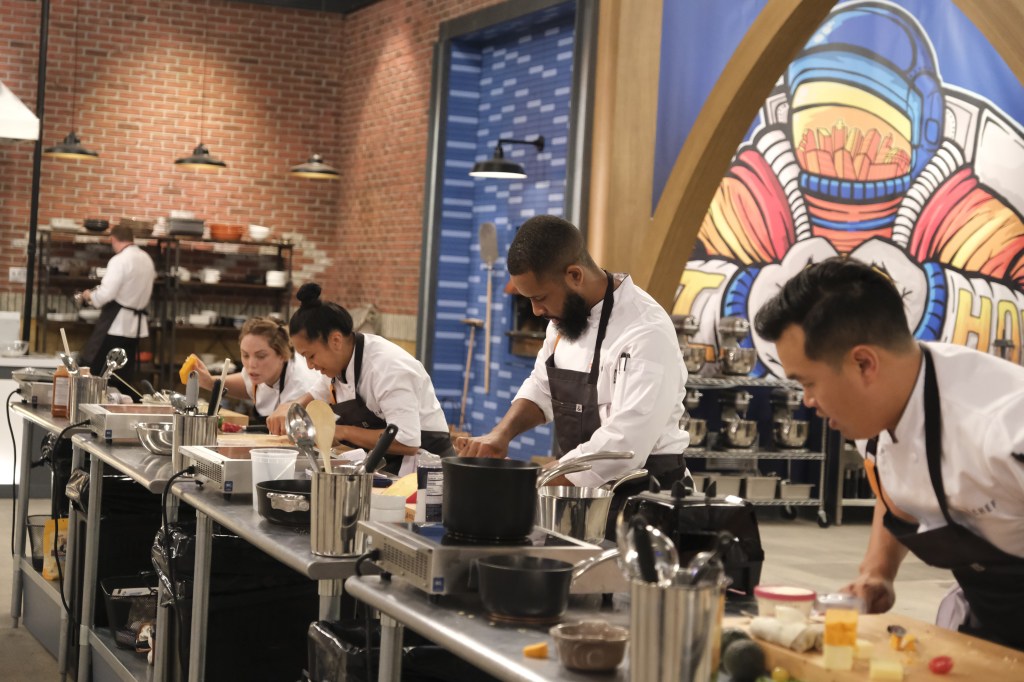 For 19 seasons, the gifted contestants of Emmy Bravo-winning “Top Chef” have been thrust into the reality show with the show’s signature Quickfire Challenge. While the Quickfire Challenge isn’t as fiendish as, say, the baskets in “Chopped,” it’s fast-paced and built around local themes or ingredients or even cooking utensils (or lack thereof).

What usually stands out are memorable bites. But who takes up the challenges? The “Top Chef” producers – just as passionate about food and storytelling through the culinary arts as the test chefs – spill the wick.

“When I invent the Quickfire Challenges, I start with ‘What’s the funniest thing about our host city? Is it famous for ramen? Was the fajita invented here? Does it have the largest Nigerian population? Is their local hero a sports star?,” says Thi Nguyen. “From there, I dig deeper into the backstory to develop a challenge around her.”

Nguyen offered a Quickfire example from the show’s final season, “Top Chef: Houston,” in which chefs were asked to cook swallows, which are starches dipped in a stew or soup. “Nigerian cuisine is all about swallows and has so many spices and rich flavors,” Nguyen says. “But we don’t ask chefs to make their own swallow – we want them to experience it, be inspired by it, and then make their own interpretation of it.

“So how do you make it difficult?” Nguyen continues. “You split them into groups by the swallow, have them pull a knife, and push them out of their comfort zone by introducing them to spices and ingredients they may not be familiar with. At the end of the day, I look at how to build a challenge that tests them on their creativity, agility, and/or skills. Quickfires should be fun, exciting, and not only make you sweat, but also give you a fun little history lesson.

Frank Crane, whose credits also include ‘MasterChef Junior’ and ‘Below Deck’, says, ‘Everyone has their preferences, but the best part of ‘Top Chef’ is the ability to research a new city each year and find out what ingredients help establish a sense of belonging.

“I love exploring new cities, but as a Southerner, I’ve been patiently waiting to highlight my all-time favorite – queso! Houston has become the perfect opportunity to ‘search’ for my favorite food while finding a way to turn this classic on its head and find a new way to approach something I’ve known all my life, which is exactly what we hope our chefs will do. -to be already and create something familiar in a completely new way.”

Another producer with elite culinary credentials is Justin Brooks, whose work on “MasterChef USA” paired him with world-class culinary talent. “Many times I’m asked what it’s like to take on challenges for a show as important as ‘Top Chef,’ a show that prides itself on testing the most talented chefs in the culinary world,” he says. “You might think it’s as simple as testing the chef’s culinary skills. But I would say there is a little more than that. It’s really about creating a meaningful barrier for our chefs, not only to keep them busy on live TV, but also to allow them new learning experiences that they couldn’t have had anywhere else. Whether they’re diving into a culture or using an ingredient they’ve never had to deal with, ultimately watching their growth is the best part of the job!

Producer John Adams has worked with some of the best (“MasterChef Junior”) and worst (“Nailed It! Mexico”), and says of the Quickfires, “I feel like there’s a deep part from my brain that is always working and thinking. from challenges. Ideas and inspiration for a challenge come to mind at random times: while driving, at the gym or sometimes just what I feel like diving deep into the host city really helps to exercise the brain to find unique and little-known facts and then find a creative way to relate them to the food. I try to always think of fun and unique challenges and places that I would personally like to participate in or experience.

Producer Caitlyn Owens notes, “I’ll be honest, before Season 19 of ‘Top Chef’, I had been to Houston twice, and I couldn’t tell you where I went or what I experienced. But coming back as a producer with the show and falling in love with a city through its food culture and extremely welcoming people was so unique. It was hugely inspiring to hear local chefs talk about their passion for food and in particular for their city. These hard-working people were behind our Asian Night Market Challenge, giving our viewers a virtual taste of something you might not normally associate with Texas. Sharing even a small part of their stories through our show has made me proud to do what I do.