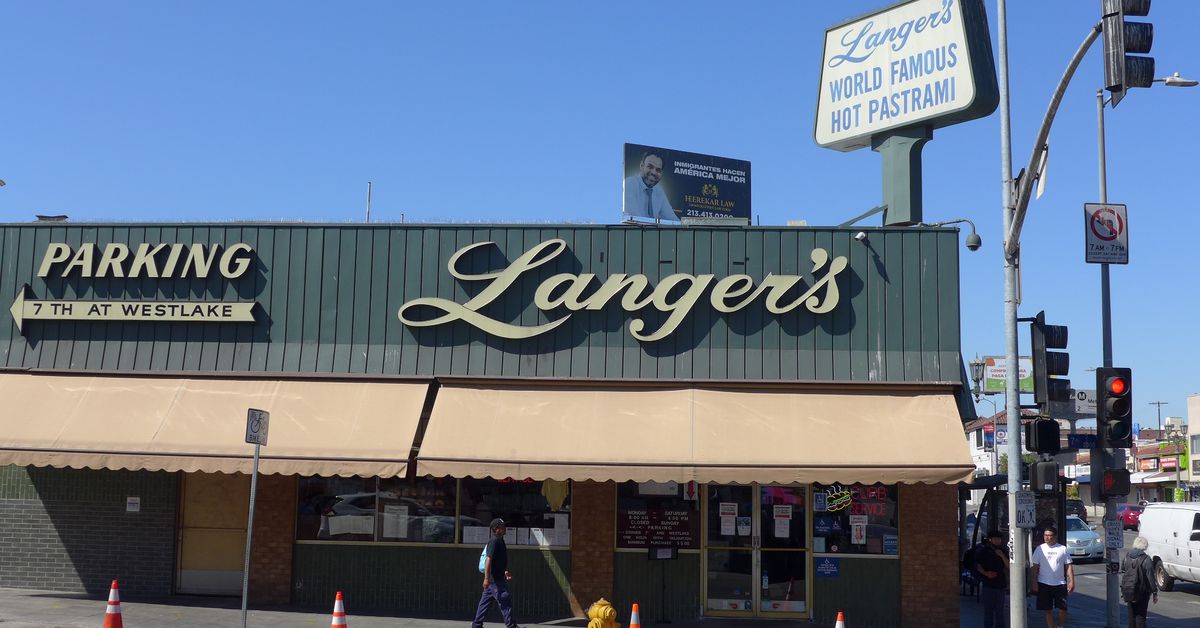 When it comes to choosing the best pastrami in the country, there are really only two contenders – Katz’s and by Langer. As a New Yorker, I have always ardently believed in the former and admired the latter, but considered it inferior. Well, a recent trip to Los Angeles gave me a direct comparison, and you might be surprised at the result.

Along one side of the dining room, a series of carving stations offer colorful respite from the restaurant’s unrelenting shades of brown. Unlike Katz, where the sculptors are prominently displayed, all you see at Langer are bobble heads against a gleaming background of yellow and orange ceramic tiles. Like at Katz, Langer’s meats are carved by hand, resulting in thick, variable slices – a rarity in demimonde pastrami.

“How about a pastrami sandwich for breakfast?” I thought arriving by metro in the middle of the morning; the restaurant is open 8am-4pm, seven days a week. Once a uniformed waiter seated me – there is no self-service at Langer, no queuing for your sandwich – I noticed that a few tables and booths around me were occupied by customers wanting plates of pancakes. I ordered the plain pastrami sandwich ($22), coffee ($4, with refills), and coleslaw ($4.50). The sandwich came with only half a half-sour pickle and no pickled tomatoes, suggesting that the typical Langer customer has little enthusiasm for pickles.

The sandwich was a good size, piled an inch thick with shiny, steaming pink meat. What immediately caught my attention was the lighter than usual rye bread, aggressively seeded with a crispy crust; each slice was quite large so the amount of pastrami in the sandwich seemed particularly generous.

The pastrami itself was a perfect meat-to-fat ratio, with half of the slices noticeably veined or edged in fat. I found myself wolfing down the sandwich, not bothering to add the mustard – it tasted so good. The meat was almost sweet, maybe a little less salty than usual. As with most pastrami, it only tasted slightly smoky.

When I tweeted a photo, several interviewees asked me why I hadn’t ordered menu number 19, a house specialty that features pastrami, Swiss cheese, coleslaw and Russian dressing. . As a New Yorker, even the thought of this kind of pastrami abuse makes me a little nauseous.

Shortly after that Langer sandwich, after an arduous plane ride that saw multiple delays and a memorable trek through angry crowds at Newark airport, I found myself outside Katz’s with its colorful neon lights. Hoisted vertically, its main sign is now dwarfed by high-rise towers — but Katz’s Lower East Side has fared better economically than Langer’s.

Inside was the usual decrepit row of Formica tables lined up in a room covered in photos of celebrities and beer signs. Lines of supplicants radiated from carving stations ending in counters of hot dogs and fries, the latter topped with salami. Hard fluorescent light prevailed. The setting reflects an era not unlike Langer’s, with its slogan “Send your boy a salami in the army.” Indeed, the current version of Katz opened in 1949, making its premises barely younger than Langer’s.

Langer’s I believe was founded as a more elegant and bourgeois place, with signifiers of elegance in the chandeliers and plush seating, while Katz’s was more of a working class dining room, hence the ticket when you enter and transparency at the cutting station since customers can observe the preparation of their sandwiches.

Although founded in 1888 as a sausage factory (the oldest sign on the side of the building proclaims in Yiddish “Wurst fabric”), we don’t really know when Katz’s added pastrami to its menu, or even how pastrami became the wonderful product it is today. Throughout the early 20th century, Romanian Jewish restaurants did not serve it, even though the dish was supposedly of Romanian origin. It’s hard to believe that our own salted, smoked and steamed pastrami is a descendant of pastirmawhich is a dry jerky served at room temperature.

To give Langer and Katz an equal chance, I sat at one of Katz’s waiter tables. Occupied almost exclusively by tourists, the waiter’s tables are considered bad taste by aficionados, who prefer the ritual of waiting in line.

The sandwich turned out to be the same size I used to get straight from the carvers, with about 50% more pastrami than Langer’s at a price ($25) not much higher. The bread at Katz is inferior to Langer’s, serviceable but a bit boring. The pastrami at Katz was darker, more deeply flavored, and a bit tougher than Langer’s – part of the fun of pastrami is having to chew it. There was a funkier pastrami taste from Katz and a thicker layer of spice along the edges; the amount of fat was about the same in both places.

I liked them both, but I liked Katz’s one more in its working audacity unchanged by time. Langer’s was a lighter, more polished pastrami sandwich more suited to sunny California. Not sure I’d eat a pastrami sandwich from Katz for breakfast, but in Langer’s case, it was just the ticket.


Register to receive the newsletter